More coming in a few days.

​Just a little preview of my book...  "The Cruise" 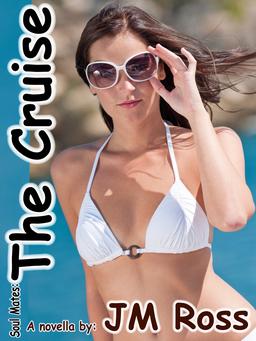 8 weeks later at A downtown, New York fitness center...
Susan reached for her cell phone as she turned the speed up on her running machine. “Sid... Dear... How are you?” she asked as she wiped her face with a towel.
She tossed her head swinging her hair onto her back. Then as her one hand held the phone, the other drew her hair together, along the other side of her face and down over her bust line. She liked the way the man on the next machine was watching her and she discretely turned giving him her best profile.
She stopped the machine and quietly listened for a couple more minutes.
Then she said, “Get serious.” She hung up and tossed the phone back into a basket.
Susan leaned over to the man exercising next to her and said, “My agent wants me to gain 50 pounds for some kind of a promotion. No way! Not after all the work I put into this body. Just look at that ass...”
She waited for him to look and then continued, “You're looking at a perfect sixty-eight. Just like Playboy and the Miss America contest, my WHR is a perfect sixty-eight and I'm not giving that up for any book deal... You know? Not for a damn book deal.”
She turned to the side so that he could see again and said, “Isn’t that the best ass you ever saw?”
The man leaned over, stared at her backside and then gave an amused nod.”
After another half hour, she turned off the machine and walked to the shower. As she walked away, he watched her hips shift from side to side.
Later, as he stepped into the shower, he said, “Hey Al? What's a WHR?”
“Don't know. What context, you talking about?” asked Al?
“I don't know either. But, this lady was talking about having a perfect WHR. A 68.”
“OK,” said Al, “That's a waist to hip ratio. Ya, that's the comparison of the size of her waist to the size of her hips. Sixty-eight probably means she got a narrow waist and a nice butt. Actually, it's supposed to be a sixty-eight. Was she cute?”
“Ya... But she got a lot of attitude, too.”
Later as Susan sped out of the health club parking lot in her Viper, she took another call from Sidney.
“Common Sid! Be realistic!”
“I don’t care about what other actors do. I’m a writer.”
“Ya... Ya... Ya... I know the book ‘Black Like Me.’”
“Ya... And he died of skin cancer too. Well, I’m not going to die of fat for a lousy book and that’s it.”
She listened while she blew a yellow light and pushed the little car up to 60 in the next city block.
“Sid, dear. So he didn’t die of skin cancer. It doesn’t matter...” She stopped speaking and listened again.
“Alright... Alright... If it’ll make you happy... But then you have to give it up... OK... OK... Go ahead and talk to them. But, you already know my answer and then it’s over. Right?”
She listened for another minute and then hung up on her agent.

The following day in the publisher’s office...
“Sue Watson,” said Sidney, “She’s perfect. Hard body, good looking, and a heck of an investigative reporter. If they’ve got a fattening machine, she can find it and write about it.”
“I don’t know Sid,” said the editor-in-chief, “She’s too finicky. Everyone knows what she pulled on Wright Publishing.”
“She’s a bitch,” said another man in the room, “Too hard to deal with. I agree with Frank, I don’t think so.”
“But she’s perfect for this,” Sidney lied, “Picture that lovely body turning into lard combined with a tell-all book. With her strength in writing, we’re talking terrific sales numbers.”
“Is she on board with this?” asked Frank.
“Of course.” Sidney lied, again.

Two hours later in Susan’s New York Apartment...
“But Susie, you haven’t sold anything in three years. Publishers won’t even talk about you anymore.” Sidney said.
“Get serious Sid. There’s no way I’m getting fat for your lousy book,” she said while taking a bite of her cottage cheese.
She stopped in front of the mirror on the door and examined her well-toned body. Her eyes ran down over her modest sized breasts to her hard abs and narrow waste to her firm round backside. Sidney watched as she moved around her apartment. It was obvious she was avoiding eye contact with him. Then, she was back in front of her mirror.
Susan examined her thighs and calves. Her thoughts shifted to concern about being too muscular and then back to her breasts. She’d thought about an augmentation at one time but ultimately, opted to stay with the lean athletic body look.
“Susie, actors do it all the time...”
“You already know my answer,” she cut him off, picked up the remote and starting flipping through TV news channels with the sound off.
“They say Renee Zellweger put on 30 pounds to play ‘Bridget Jones’...” Sid continued unabashed.
“Two times, she did it and she said it was fun!” he lied.
“I don’t know about that,” said Susan.
But there was something in the way she hesitated. She was softening. Was it that she wanted to be persuaded just a little more? Sid sensed weakness and pressed forward.
“There’s Charlize Theron. They say she gained 30 pounds to play in ‘Monster’ and she got an Oscar. Susie... An Oscar!! And Jessica Chastain. And Hilary Swank for her role in ‘Million Dollar Baby’. And then there’s De Niro, who put on 60 pounds for ‘Raging Bull.’”
“Susie, I think this job is made for you. It’ll be fun. You can write it as you go and in six months, I’m thinking Pulitzer. It’s big stuff... A real exposeé. I’m serious about this, sweetie.”
“De Niro, 60 pounds?” she asked.
“Ya. So you put on a few pounds. There are a few before and after pictures. Then you do like the actors and take it off. You crank out this block buster and wammo, you’re big time again.”
“Only a truly good investigative reporter like you could put this together. That’s why you’re right for this,” said the master of schmooz.
Susan didn’t answer.
“They got some kind of a machine that makes people fatter. You investigate and find this machine and that’s it.”
Sidney continued, “So you make up a lie about why you want to get fat. Then you nosh a little and you try to find that machine. Get pictures if you can. Maybe try it a little.”
He watched her expression turn sour and quickly said, “Or not.”
“Or not, is right!!!” snapped Susan.
“Hay, this is a fat tour. All you have to do is blend in, gain a few pounds and investigate. And when it comes to investigating, Honey, you really are the best.”
“And Honey, the proposition is pronominal. All expenses paid for a 6 month cruise. I said all expenses and... Get this Susie... A $15,000.00 advance... nonrefundable!! Susie, this is a heck of an offer.”
Susan stopped pacing and stared at Sidney.
“Am I a schmooz or what?” thought Sidney.
Later that night, as he took off his coat, Sidney said to his wife, “Cecelia, I sold a big one today. It could start paying off in about 9 months.
“What, like a baby?” she asked as she stirred a pot.
“Precisely,” he laughed.
“Honey, sometimes I really do think I could sell ice to Eskimos,” Sid continued.
“As long as it pays the bills, Sidney dear,” she said, “As long as it pays the bills.”

The Cruise
by JM Ross
Copyright 2015

Prologue:
“Hofstedt Cruise lines – Fulfilling all your fantasies & much more”

I was paid to let them Plus-size me and then, write about it.
When I began, I was a writer with an athletic figure.
But as I watched my hips and my bust grow, I didn't realize what this would mean.
It changed my life.
And there was far more to this ocean cruise than simply eating pleasure.
I paid dearly for this cruise.
Others paid with their lives.

Frank, Editor-in-Chief of Warren & Knols Publishing passed out a set of internet printouts to the two other men sitting at his conference table.
“Have you seen any of these?” he asked.
“What is this? Skinny women and fat women, before and after?” asked the man to Frank’s right.
“These women are showing how they gained weight when they went on a cruise,” said Frank.
“So?”
“This is about one particular cruise line that specializes in a gourmet cuisine and brags that their food is so great that everyone comes back heavier and loving it. They're saying 40, 50 pounds. Sometimes a hundred pounds.”
“Frank?” the man to his right said with skepticism, “Fifty? A hundred pounds? Isn’t that kind of far fetched? What do you think you’ve got here?”
“Bob, there are indications that they have a feeding machine, a fattening machine. Here, take a look at this.”
Frank pointed to a sentence in one of the printouts, “...hooked me up to it and in three weeks, I gained 30 pounds. My thighs were...”
“And you believe this shit?” Bob asked.
“I think, I do. I managed to verify some of this through another source. It’s likely they do have a fattening machine. But, this statement was the only one out there...” the editor hesitated, looking to each man, “And now, even this has been pulled. You understand? It’s just not out there any more. I’m thinking that maybe, they don’t want this known by the general public.”
He sat back, letting the information sink in and then continued, “Do any of you know the term, ‘Gravage?'”
There was no response.
“It’s a process of forcibly fattening animals, especially ducks and geese. A tube is inserted down into the stomach and a large amount of food is pressed in. If this is done on a regular basis, the animal will gain weight very quickly. In Mauritania Africa, they force feed young girls breadcrumbs, olive oil and goat’s milk and camel's milk until they throw up. The belief is that their women are more attractive if they’re heavy. HBO did a story on this. The interviewer claimed he gained 20 pounds in two days doing this.”
“So?”
“If some cruise line is hiding the fact that they’re force feeding people, that’s a story and I want it. What, if we could put someone on that ship? It could be a hell of an investigation and a hell of a book.”
“OK. Assuming this is true, then what have you got in mind?”
“I’d like to research this further. If we’re comfortable that this machine exists, we search for a writer to put on the cruise. I’m thinking a woman and maybe, a photographer too. She gains a few pounds, writes an exposeé and we’ve got our blockbuster.”
“I’d like to call a few agents... See who’s available.”
The men agreed to look into it further and then take the matter up again in the following weeks.